My First Days in Denmark

Much like the trip to get here, my first few days in Denmark have been a bit of a rollercoaster. My last post ended with me arriving by train in Odense around 11:30. I was then in a train station with no idea where to go or who I was supposed to meet. I realized that I hadn't arranged a meeting location with my buddy, Malu Jamil, nor did I have any way of contacting here. I walked around confused for about 10 minutes until I saw a couple girls walk into the station with signs that said "Welcome to Denmark". They were my welcoming committee!

From there Malu and her friend Anila took me by bus to Ikea to buy bedding for my room and to a small market to buy some groceries. I wasn't feeling too adventurous so I bought some bread, cheese, and some small packages of meat. We went back to Malu's apartment to start cooking a chicken to eat for supper. Then they brought me to my dormitory to drop off my stuff and to see my room. We also met Malu's other buddy, a spanish exchange student named Sandra that lives two doors down, and Sandra's friend Maria. We then went back to Malu's apartment where I promptly passed out. Keep in mind that I had only had 2 hours of sleep since waking up Tuesday (after a short night of sleep in a hotel). I woke up in time for a delicious chicken, rice, potato, and interesting reddish-orange sauce meal. Definitely a great way to start my trip here :-) They then brought me home so that I could continue sleeping my night away.

10 hours later I woke up and spent a couple hours in the kitchen on my floor. My living situation is this: I have my own bedroom and bathroom (pictures will be posted some day...after I clean) and I share a kitchen with 14 other people, it is actually a really nice arrangement. I met people and had a good time talking to them. They gave me their wifi passwords so I could use the internet from my tablet as my luggage was not here for me to use my laptop. I then passed out again for a 4 hour siesta. After waking up I chatted with Nikki, one of the twins from Iowa State that are studying here in Odense as well, and made plans to meet up with them downtown to meet their buddies and go out for the night. I was told to ask the bus driver where the "city hall" is, which I did. He was extremely unhelpful and did NOT tell me where my stop was, so I got off late and was unable to find the town hall. After walking around for about 45 minutes and getting lost, asking a couple people for directions and still receiving no help, I had completely missed the time that I was supposed to meet the girls. I decided to walk back to my dorm. But...how do I get back? I then spent the next 60 or 90 minutes weaving through town trying to find my way back in the cold. It was miserable, but I made it.

At this point I was content to sit in my room and read all night, but Nikki messaged me and tried to get me to come out again. I told her they would have to come get me, but then my tablet died leaving me completely off the grid, no way to talk to the world. So there I was, laying in bed in my boxers reading "A Game of Thrones" at 10pm when I hear a knock at my door. I open it a crack and peek out to find that Nikki and Danni had sent somebody to get me and that I was being escorted to a party. I got dressed and rode on the back of a bike across town to an apartment where I met some new friends. I declined offers of beer, but was treated to a Danish drink called Fisk, which is a liquor flavored after fisherman's candy. The flavoring is licorice (black licorice, the only kind they have) and menthol. Yes, you read that right. Menthol. It basically tasted like cough syrup flavored mouthwash, but it was actually surprisingly pleasant. After chatting with the people and saying "skål" (danish for 'cheers') with every drink, it was midnight. By this point in america, if you haven't gone out, you're probably settling down. Not so, in Denmark. That's when the party starts. We then left for a bar downtown that has 2 for 1 beers on Thursday. It was an interesting experience in a dungeon-like setting. The bathrooms did have dyson blade hand dryers though, which I think should be standard in ALL bathrooms, public and private. After a couple beers, and a few more fisk shots at the bar, I was extremely surprised to hear a song from The Lion King and Spice girls played. The bar also had two stripper poles in it which actually had GUYS dancing most of the night. Not stripping, but goofing around. Funny to note: they were friends of the people we were there with...Also, at one point, a couple of those guys randomly undid their pants and danced with them at their ankles for a couple minutes and everybody acted as if that was normal. Eventually things started to die down, the crowd thinned out. There were two girls over in the smoking area of the bar making out for a while, so that was interesting. And then we cleared out at 5 am. In America the bars close at 2 or 3am, right? Well, in Denmark, 5 am is typical for a Thursday, and 6 or 7am or later is typical for the weekend. Nobody wanted to bike me home and I had no idea how to get back (remember, I was wisked away from my room earlier in the night) so I had to take a cab. I have never ridden in a cab before, but it was a 20 dollar cab fare. More motivation to get a bike!

That is enough for now, but stay tuned for more! 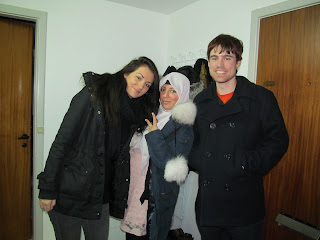 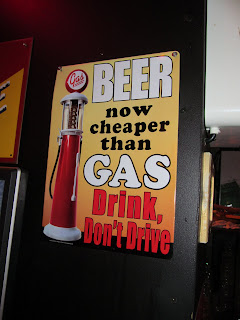