My First Weekend in Odense

My last post ended with me getting home after 5 am on Friday morning. I was then able to sleep in until 2pm when I was woken up by an annoying phone call to my room (oh, btw, i have a phone in my room I guess?)...to my surprise, my luggage was FINALLY here!! I grabbed it an unpacked and instantly set up my laptop and started charging my tablet. But then tragedy struck. About 30 minutes after setting up my laptop the charger chord/brick for my laptop burnt out. Totally bogus because the power brick is supposed to handle 100-240v and the power supply here is 230v so I don't know what happened, but the reality is it broke.

I was sad so I took a nap for 4 hours...then I spent the rest of the night talking with people from my floor in the kitchen and later texting on my tablet and reading A Game of Thrones. I also found a radio station app on my tablet which includes Iowa Radio Stations. It doesn't have our major country stations or Kiss, but it does have 102.5 and 104.1 so I have been listening to them at night while I sleep.

Saturday morning Mads, Cecilie, and I went with Morten in his car to the Fyn Bazar (one A in danish) to look around. It is a middle eastern and asian bazaar with a lot of interesting ethnic clothing stores. I was able to buy a wallet to fit my danish money in, but it is only a LITTLE bigger than my normal wallet (which is BARELY too short to hold the danish money) so I can use it when I get back to America to replace my aging wallet. They also have a lot of fresh produce, one of Denmarks only food courts, and a butcher shop. From there we went back across town to go the post office. At the post office you walk in and press one of two buttons. Button 1 is to pick up a package, button 2 is to pick up tickets. If you order concert tickets or something like that, you can pick them up at the post office. After you press your button, a number gets spit out and when your number is called it is your turn. I actually prefer that to having to stand stationary in line. We then went to El Giganten (electronics giant), pretty much a Danish Best Buy, to buy a universal power adapter to replace my broken laptop one. Then we went to Bilke, the closest thing to a Walmart in Denmark, where I was able to buy Toilet Paper and groceries. I bought eggs, milk, cheese, meat, a darker bread (the Danes are all about their black rye bread here, but I am still to chicken to buy it so i went with a medium dark bread. Haven't tried it yet though!), nutella, butter spread, fruit, and cereal. There was a sale on cereal 6 boxes for 100kr (just under 20 dollars) so I got some. I was super stoked.

After getting back to the dorm I bought a bike from a Spanish exchange student who is going back home. Then I set up my computer and basically spent the rest of the day playing video games and texting Miranda. Needless to say, it was an amazing day! haha

Then today is Sunday. The day started with an early (for me) breakfast of cereal with a banana in it and nutell on toast, followed by a bike ride to the train station for a walking tour of Odense. My groups tour guide was a Ukrainian exchange student so he didn't really know much about the city either, but he did know more than us. The best part was just being able to talk to other international students. The surprising thing is that there are basically no other students from America that I have met, they are all european. Probably because most Americans like the english speaking countries in the UK or Australia/New Zealand, or the warmer southern European countries :P My group consisted of an italian girl Frederica (sp?), a German named Helen, a slovenian named Tina, a polish guy and girl, some other girl that I didn't ever talk to, and then Danni and Nikki from ISU. It was really neat how our group organically mixed up throughout the tour so we were always talking to new people. I look forward to seeing them again! At the end we stopped at a market that was open on Sundays (most danish shops are closed on sunday) where I found frozen pizzas, 2 pack for 30 kr. I bought two of them, making it 4 pizzas for around 10 dollars :D What a deal! That was my American move of the day...

After coming back home I fried up a few eggs on the stove top and then melted some cheese on them and placed it on toast. I finished the meal off with a banana and retreated to my room to eat some "MCENNEDY: AMERICAN WAY" brand chips-ahoy style cookies.

Now I am just chatting online and will play some more video games to round out the day, relaxing before orientation and classes begin this week. Thanks for reading! 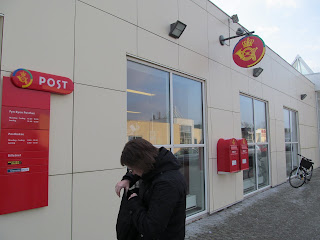 Cecilie outside the post office, about to pick up her package! 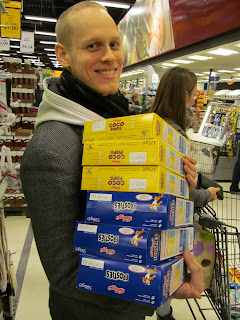 Morten (don't even try to pronounce it. Hint, it's NOT pronounced Morten) 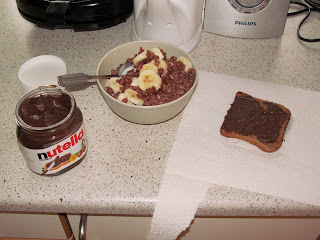 A breakfast of champions!
Posted by Cody at 8:49 AM