Monday morning began with a cold bike ride to the main campus at 8am, about 10 minutes away from my dorm. There I met my buddy Malu who showed me how to get my student ID and my swim card. The school pool and sauna is accessible by card in the mornings, but I doubt I will ever use it. The main campus building as a whole is actually very interesting. It is one LOOONG hallway, I'm talking like 1k+ long (a kilometer is .6 miles). It also has a "lane" down the middle that is reserved for vehicles. They have some fork-lift type things that zip around carrying things from one part of the building to the other.

She then dropped me off at the auditorium where I met Danni and Nikki to listen to an introduction speech. Pretty standard. Then there was a break where coffee and tea were served. Always coffee and tea. I miss the water and lemonade that are often served in America, but o well. We then sat around waiting for the break to end and we gathered with all the Engineering students to walk over to the Engineering campus for our orientation. But first they served us lunch which was a sandwich and glass-bottle soft drinks. There were a few different choices of sandwiches including one with super tiny shrimps on it and hard boiled eggs (ew), so I opted for a roast beef one and some Pepsi Maxx(I am too scared to drink their bottled water. Idk why, it is irrational). As I removed the tomatoes from the sandwich I was pleasantly surprised to find that the sandwich had french fried onions on it! Score! It also had pickles and an interesting yellow spread that was delicious. Afterwards there we learned some cultural do's and don'ts as well as learned some more information about the engineering school. The most exciting part was getting a free cinnamon roll.

After orientation, Danni and Nikki accompanied me back to my dorm to see what it was like and meet some people from my kitchen. They ended up staying and talking for an hour or two and I think they had a good time. The people in my kitchen are great people, I really lucked out. One of them is actually the president of the dorm, so that is neat. After Danni and Nikki left I did some fiddling around on the online system for school checking the school email, class registration, etc. and then went to sleep.

Tuesday morning orientation was for filling out the residency permit application for EU students, something Americans should have done already (I did!) so i was able to sleep in a bit. So I woke up and got another free sandwich (the same one) and some lemonade at orientation and then attended an IT session which covered everything I did the night before...so that was a bore. But following that we got to meet a professor for our program and learn about our particular exchange program - for me that is Software Engineering. We toured some facilities and saw the group spaces we will get for our group project. That was pretty much it for the day.

Wednesday was my first day of classes at SDU. I needed to sign up for one more course but I wasn't sure which I wanted: Android Programming or Game Design, the first is wednesday morning and the other is in the afternoon. So i went to both so that I could make a decision afterwards. This is the first semester that the android class is being offered at SDU and the teacher was completely unprepared and the class was a disaster...The teacher doesn't really have much experience with android programming so he has an assistant there that hopefully knows more. I wish I had more to say about the class, but it was just a wreck. My afternoon was spent in Game Design where I had a much more pleasant experience. The class was about 10 students and seems interesting, but unfortunately I think the class would be pretty useless as the focus is more on the formal elements of games (players, rules, conflicts, mechanics, design) and less on how you use programming and tools to make games. If there was a follow up course I could take, that might be worth it, but I think learning android is going to be more beneficial to me in both the short term and long term. even if the class itself doesn't get any better, I will have the book and should be able to learn sufficiently.

Then today, Thursday, I had no class. I started the day by attempting to ride my bike to my buddy Malu's apartment, but she gave me wrong directions. I was supposed to turn LEFT, but she told me RIGHT, so I ended up making a circle back to my apartment. I got a hold of her via facebook and got correct directions and soon we were riding the bus to the city center to visit the National Register. There I showed them my residency permit and was given a CPR-Number. This number allows me to set up a bank account, and shortly I will receive a card with the number on it which will allow me to access free health care in Denmark. Then Malu and I went to find a bank to set up an account for me but found out that one bank charges 300dkk and another charges 400dkk to set up an account (60-80 us dollars). No way! The third bank asks for a 1000dkk deposit (175 us dollars) which I get back when I close the account, but I didn't have that much on me. I will have to go back tomorrow to do that. On the way back to the bus I bought a couple awesome things: Sriracha $5 at a small mid-eastern store and gloves $8 (i didn't own gloves in america or i would have brought them :P) and a scarf $15 at H&M. I can now ride my bike without the wind biting at my neck :-)

That pretty much sums up the exciting things that happened this week. As you can tell, life here isn't that much more exciting. I really do need to get a bank account set up, though, so I can use it to buy a SIM card with internet for my phone which is shipped and on it's way. Last check it was "in transit" from Indianapolis and should be here next tuesday or so via fedex. Hopefully the delivery goes smoothly.

Again, thanks for reading!! 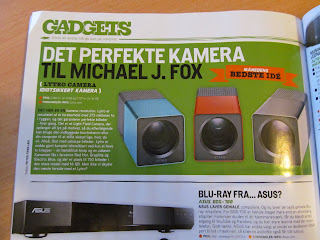 This is short review of a camera in a Danish magazine equivalent to Maxim with a title that would NEVER fly in an American magazine: "The Perfect Camera for Michael J. Fox" 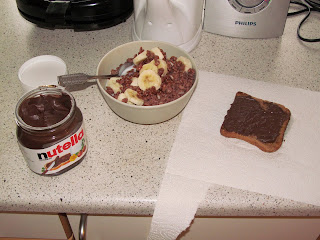 A breakfast of champions! Chocolate cereal with a banana served with nutella spread on toast :-) 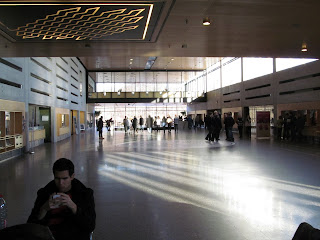 This is the "main campus square" or something, the foyer for the main campus building. I tried to take a picture of the super long hallway but it didn't really capture it properly 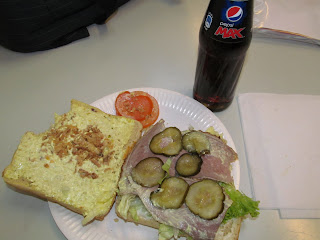 This is the delicious sandwich I had (with the gross tomatoes on the side, where they belong). I can't believe I never thought of french fried onions as a sandwich topping before this!! 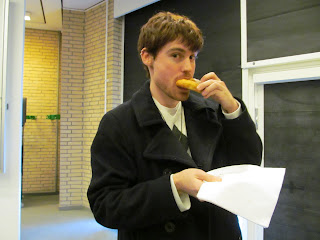 Yum, a cinnamon roll! They sometimes call them "Cinnamon Snails" here
Posted by Cody at 6:36 AM