I have a phone!

Things are finally settling into a rhythm here in Odense. I have class Tuesday(my project management/teamwork class), Wednesday (Android Programming), and Friday (C#/.Net Programming) mornings 8:15-11:45. Class usually involves a bit of lecturing followed by hands on work and exercises. It also has a 15 minute break after each hour which I find odd, but then again it is a 4 hour class so I am grateful. I also have a group project that will be starting up in the week or two that will last the entire semester but doesn't have a scheduled time.

Aside from class, I set up my bank account (waiting for my card in the mail) and received my phone and SIM card. I can now call/text danish numbers for free as well as using my data plan to text american phone numbers for free. I am using a company called OiSTER to get 3GB of data, 3 hours of talk, free SMS/MMS for 99dkk/month. No contract. That is the equivalent of $18. That is OUTRAGEOUSLY cheap by US standards and something I mill sorely miss when I get back :-/ almost makes up for how expensive everything else is haha

Friday I went out pretty hard with my group of Polish friends and Tina from Slovenia which was fun. I did a lot of dancing and look forward to embarrassing myself to crappy american pop music (and some great 90's hits!) in Danish clubs for the next several months. Saturday I didn't feel very well, though, and not just because of the partying the night before. I had been sick for a couple days, and it peaked Saturday night. But I drank plenty of water and ate a big meal and went with Danni and Nikki to meet Kasper, a danish buddy of theirs with the same birthday as me. We got lost on the way, and it was freezing (reached a record low for that day, I believe, of around -25 Celsius) but we made it. It was a bit of a bummer not being able to have a large celebration with friends and family for my "21st" birthday back in America, but my danish floormates made up for that by making me a danish birthday cake Sunday afternoon. The birthday cake actually had very little cake but had a lot of cream and a layer of bananas and macaroons. It was really interesting, and pretty good! Also, the Danes LOVE their flag. We like to think we are patriotic in America, but they seriously have them everywhere, especially for birthdays (as you will see in the pictures below). They also gave me a present!...Saltlakrids. Also known as the worst thing ever made. It is salty licorice, and of course their licorice is black licorice. They bought it as a joke knowing I would hate it, so I humored them by trying the strongest type they bought. Yeah, my reaction lived up to their expectations and I made a sour face and almost gagged. But it was a pleasant afternoon and made the sting of being away from home almost disappear. It is interesting to note that I stayed completely sober for my entire 21st birthday. And I am completely ok with that!

Then yesterday (Wednesday) I helped surprise Anela for HER 21st birthday. If you'll recall, Anela helped my buddy Malu greet me when I arrived in Odense. She is leaving soon to study abroad in Spain so it was really nice to be able to thank her for welcoming me. Sandra, Maria, and Laura from Spain and Fawad, an afghani friend of Malu and Anela were also there. We ate at a place called Jensen's Bøfhus, a nice steak/burger joint. For about 20 dollars I got a nice cheeseburger (served with a DELICIOUS spicy mayo) with onion rings on it, fries (actually unlimited, they keep serving them if you eat them all), and access to the salad bar. Half of us got burgers, and the three spanish girls ordered a waffle with ice cream and chocolate sauce. The others were eating their burgers with a knife and fork, and it was too bit to easily fit in my mouth, so I tried doing that too. It was really hard and took forever, but I conquered it. Pictures below.

Today I did laundry for the first time since I got here. I literally wore every piece of clothing I brought...so it was time. I went to Bilka to buy laundry detergent beforehand but accidentally brought home fabric softener. Oops...then I found out that the washers actually dispense their own detergent so it was a completely unnecessary trip to begin with. O well, I bought some groceries while I was there.

That sums up most of the interesting things that happened this week. I also submitted my application to be a CA at Freddy Court and will be interviewing with them over Skype this Saturday. They said to dress business casual..well, I Guess I'll wear a sweater? Not like I brought business clothes over here. The cool thing is I can probably get away with not wearing any pants. And who doesn't have "show up to an interview without any pants" on their bucket list? I'll let you all know how it goes. 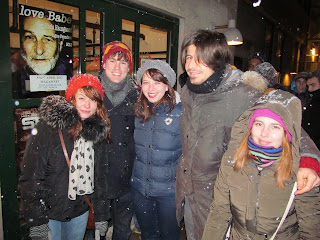 Hanging out with some friends standing in line for "A-Bar", a favorite for international students 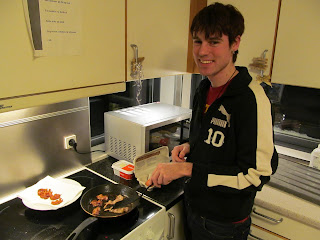 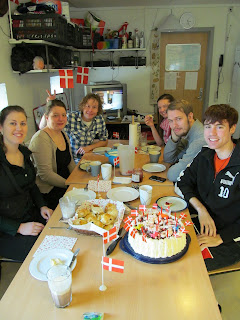 My floor made cake and rolls for my birthday :D 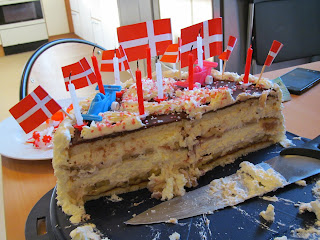 View the layers of this cake...I sure can't make this... 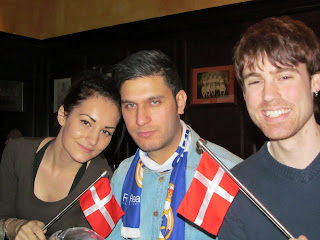 Myself, Fawad, and the birthday girl! 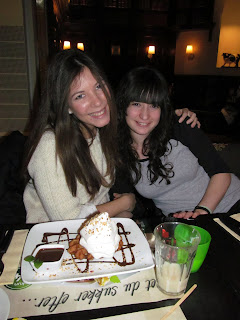 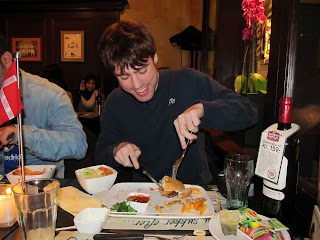 This is me trying to eat a burger with a knife and fork...it just felt wrong
Posted by Cody at 2:13 PM