As they say, "time flies when you're having fun" and it really is true. I can't believe that it has been about 2 weeks since my last real blog post! So let me catch you up on the major happenings since then...

My last post was about my "Project Work" class. Well, this weeks was no better. To recap, the first week we made paper airplanes. Last week we learned about "cultural awareness", this week we played with legos :P We got put in groups again and there was a completed lego scene set up outside the room. Only one of us could go look at it at a time and could take nothing with us, and once we started building it we couldn't go look anymore. It was a police car and a little barricade thing. We setup the barricade correctly, but just couldn't get the car together...the other groups did fine, but we were awful. Also, we were the first group to start building, so we were made an example of by the teacher. I guess I would rather learn that lesson now than on our project!

My interview with Freddy Court for the CA position for the 2012-2013 school year went really well and I was offered the job! Yay! So what that means is that I will get a free room in a 4 bedroom freddy apartment and a monthly paycheck in exchange for weekly duties like letting residents in who get locked out, dealing with complaints, making sure my building isn't trashed, etc. I get to find my own roommates which is nice, but it worried me because almost everybody I know already has roommates and places to live. Fortunately my pal Curtis Ullerich from the computer engineering department had two roommates (also in our department) and was looking for a 4th. So they will be moving in with me :-) I was also offered a position as a CA in Helser, but I think this one will work out better. Even though it means having to cook my own food :-(

Last friday (2/17) the university threw a HUGE Party that they called "Semesterstartfest" or something. I don't think I need to translate that for you, but it was great. There were 2000 students IN the university from around 10-2am. Each of the majors bars in Odense had their own locations in the building and the biggest had their DJ's playing in different spots so you could walk around and dance to the music you wanted to. In America college students drink (shocker, i know!) but not IN the school buildings, or at least not sponsored by the school, so this was very neat! Most of the international students I talked to said that it was also new and different for them, as well, so we had a great time. By the end of the night the bars were competing very strongly with each other and were selling shots for 5dkk which equates to about 80 or 90 cents. Afterwards the official "after party" was at Club Retro which is a good 30 minute bike ride from the university. My dorm is only a 10 minute ride so I decided to call it a night (as well as the other people from my dorm) to rest up for the next day.

Which was a good idea because this past weekend my friend Stanislaw had some friends from Poland visiting. So Saturday night I went to their place to meed the friends and sing with the karaoke equipment they had brought! I have a video of me rocking out to "I want it that way" by BSB which I will upload later...no shame :P But after the pre-party we attempted to go to a place called L.A. Bar that none of us had gone to before. Unfortunately the Polish girls weren't allowed in, perhaps they didn't have the right ID? So we all went to A-Bar instead. On the way there I actually started talking to the visiting Polish girls, Maria and Monika. Maria was very nice and friendly and was completely willing to talk to me, but she informed me that Monika was very scared to talk to me because she was "bad at English". So of course I started talking to Monika and learned that while her English isn't perfect, it was very understandable and she was worried about nothing. So throughout the night I kept having small conversations with them and made sure Monika knew that her English was just fine. We got back to the Pollack's house around 4 or 5am (as is usual on Saturday) and sat and talked for a while before I left. When I left, though, they were taking some more liquor down the street to a park...I tell you, these Europeans are crazy @_@

Tuesday Feb. 21st was a "Danish Movie Night" hosted by the ESN network where we got to watch a couple of the more famous Danish movies. The first was "Worlds Apart", a true-story drama about a young devout Jehova's witness whose faith is shaken after meeting a young boy and finding out that her parents are separating due to her fathers infidelity. I really enjoyed the movie for a couple reasons. It was really great to learn a bit more about Jehova's witnesses other than that they knock on our doors. Also, it was fascinating to me to see a movie with an anti-religious message. To be fair, she wasn't a "mainstream" religion, but the boyfriend and his parents were atheists and at the end of the movie she abandoned Jehova and left her former life. It is a message that I just can't see being made into a mainstream American movie and it was done in a very tasteful way that I appreciated and agreed with. But, I think even religious people could appreciate the movie and would frown upon the intolerance that it brought to light.

Between movies we had pizza. It was different. The pizza slices were HUGE which was good, but the sauce and cheese were put on in VERY small amounts which was disappointing. They had some interesting varieties. One pizza had sauce, cheese and CORN as a pizza topping. A lot of corn. I tried a bite of a friends and it was actually pretty good, I might try corn and pepperoni in the future. Some of the other pizzas just had what appeared to be TONS of onion slivers. It looked really gross, but as most of you probably know I hate onions so I avoided that. I personally had a pepperoni piece and a piece that had some french fries, some onions (which I picked off), normal sausage, and some "sausage" (basically a hot dog, but they call them sausages of course). I wish there had been more pizza sauce, but that aside they were pretty good. They also had some "Pommes Frites Sauce" which is "french fry sauce" and it appeared to be halfway between ranch dressing and mayo, but I didn't want any on my pizza. Now I regret it :-/

The second movie was called "Flickering Lights", perhaps one of the most famous Danish movies. It is described as a comedy, though imdb also has the "action" tag on it which is definitely appropriate. Perhaps a lot of the humor was lost in translation or went over my head because of cultural ignorance, but I wouldn't really describe it as a funny movie or a comedy. There were parts that were funny, as in most good movies, but not enough for me to label it a comedy. Anchorman is a comedy. The Hangover is a comedy. This? Not to me, but it was a good movie. One of the things I most enjoyed was the flashbacks that each of the characters experienced, showing memories of what caused their particular psychosis or issue and also how they met. There is a scene that we were shown at our orientation days where the guy who is crazy about guns goes off into the woods and a cow starts looking at him wrong. He the proceeds to talk trash to the cow and ask him why he's staring at him, etc. Without context it isn't really funny, but even with context and having seen what leads up to it I didn't really laugh as much. But this is Danish humor, so here is the link: http://www.youtube.com/watch?v=B5IpVVhKrd4 That aside, I did enjoy the movie more for its story than for the humor, and would recommend it.

I found out YESTERDAY (Wednesday) that some of our girl friends were going to Copenhagen today (thursday) for the weekend and that we should try to go with. Oh, and isntead of train we want to hitchhike their and instead of a hostel we want to find a free place to stay on couchsurfing.org (the girls already found one). So we looked for places, but on such short notice (and originally with 4 guys looking to go) it didn't work out. Maybe in the future we will try something like that :-) but it's ok because there is an ESN trip to Copenhagen in March that I will go on! I'll be sure to let you all know how that goes.

As always, thanks for reading!! 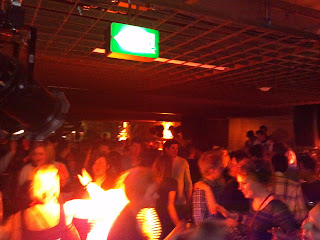 This is a glimpse into one of the areas at the party. This was actually the second smallest party area out of 4 or so? And the biggest was WAY bigger 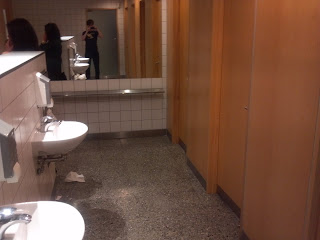 The bathrooms in the uni are co-ed. So you get your own stall with floor to ceiling door and then the sinks are out there. It actually makes a lot of sense, in my opinion. 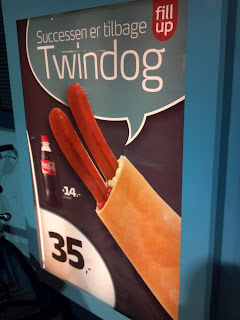 An advertisement at a gast station for their twindog. The dogs come in a bun and like so and one is surrounded by ketchup and the other by what I assume is mayo. Looks good? 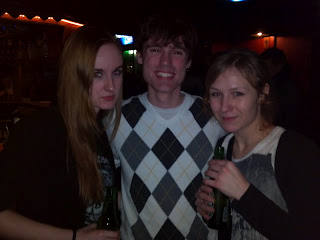 The two visiting Polish girls, it was nice to meet you! 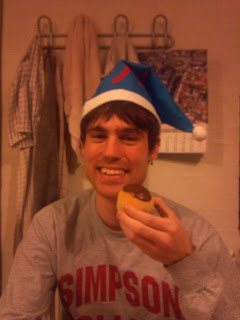 The danish ladies on my floor made some delicious Danish pastries. They are always doing things like this and, as always, it was delicious! Oh, and the hat...This weekend they are celebrating "Fastlavn", kind of like halloween, I'll explain it more in my next post. 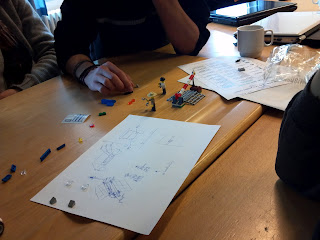 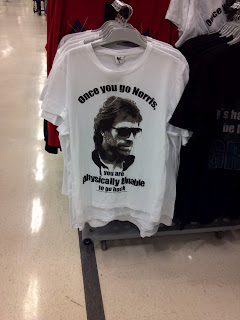 I was just walking through "Bilka" (walmart) when I found this shirt... "once you go norris, you are physically unable to go back" 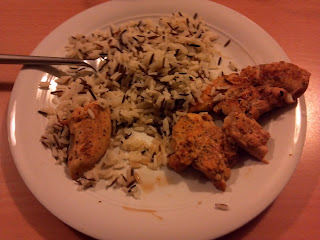 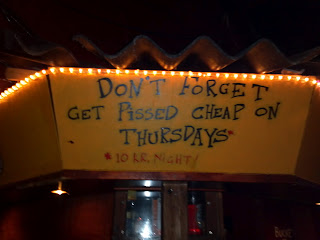