So I guess this is the time of year that people visit their friends. (when are you coming to visit me??) Sandra, my Spanish floormate, had her friend Silvia over for a couple days. Silvia is also from Spain but is actually studying in Germany. So Thursday I hung out with the Spanish girls (Sandra, Maria, and Laura) and Silvia as well as Juan, Carlos, and some of their other Spanish friends for a pre-party before going out to A-Bar. There I tried Jaegerbombs for the first time and I have to say they are definitely my favorite thing on the planet now which surprised me as I hate the two ingredients (Jaeger and Redbull) separately. But somehow together they are amazing. Conversations with Silvia were awesome and interesting because every third or fourth sentence included a German word (on accident!). She said she actually struggled to speak Spanish with the people here because she has been in Germany so long speaking German.

Friday was actually a recovery day and I stayed in to catch up on Supernatural and spend my night watching my new guilty pleasure "The Vampire Diaries". I love the show "True Blood" but there are no new episodes until July and I was really craving a good Vampire-melodrama. I am not ashamed to admit that I have loved every second of it :-)

Saturday was quite the experience and my first time partying with my Danish floormates. Odense was celebrating "Fastelavn", kind of a silly spring halloween. All I know is that it is an excuse to dress up in a costume and have fun. Wikipedia is better at explaining things than I am, so here is an excerpt from the article: Traditional events include slå katten af tønden ("hit the cat out of the barrel"), which is somewhat similar to using a piñata. The Danes use a wooden barrel, which is full of candy and sometimes oranges and has the image of a cat on it. Historically there was a real black cat in the barrel, and beating the barrel was superstitiously considered a safeguard against evil. After the candy pours out, the game continues until the entire barrel is broken. The one who knocks down the bottom of the barrel (making all the candy spill out) becomes kattedronning ("queen of cats"); the one who knocks down the last piece of the barrel becomes kattekonge ("king of cats").

So I dressed up as a cowboy borrowing a plaid shirt, handkerchief, and cowboy hat from Julius on my floor. One couple on my floor was dressed as a police woman and a prisoner, another like two Waldos, and Morten was dressed as an angel with pink wings and a white toga. We started with a group meal of Tacos which were DELICIOUS! They made a lot of meat, hard shells, cheese, corn, fresh and delicious lettuce, and some other stuff including half a kilo of peppers. Bo promise to eat whatever was left of the peppers at the end...Much to his gf's dismay, he followed through on that promise and ate nearly a pound of peppers after finishing a meal of tacos. And this was BEFORE any real drinking happened. We started out by playing a fun game called "Shrek". You make a giant pitcher of a mixed drink (whatever you want, we did a 2 parts juice/soda 1 part liqour) and start out with one die and six empty shot glasses (one for each number on the die). You go around the circle rolling the die, if that glass is empty then you fill it and it is the next person's turn. If it is full, drink it and roll again. If you fill the last glass or empty the last glass, then you have to drink all 6 (and then roll to see which glass to fill). It is really simple and fun. We were also playing rock band as well which was a blast. It had been too long since I'd played that.

Then we went to Huset (the house), which is a building they use as a bar/party room for events like this right at my dormitory. The drinks were cheap (mixed drinks for ten, jaeger bombs for fifteen kroner which is about 2.50) and the people were fun. The Spanish girls showed up all dressed as cave women which was really cool. Somewhere in the night, though, I lost Julius's cowboy hat...so I guess I'll have to pay him back for that. But I got to spend some quality time with the Danes and it was really nice. Then it was time to break the barrel. So there were two lines for two different barrels. I don't know if it was boys and girls or not, but basically there was a wooden stick and a wooden barrel and everybody got one hit. As you can imagine, it actually hurt the hand a bit because the wood was quite solid. So after several rounds somebody loosened one of the boards on our barrel and then I swung and did some real damage, messing the barrel up pretty good, and then Morten was behind me. He totally destroyed the barrel, but in the process he cut his thumb open. Poor guy :-/

After I ran out of cash I tried to buy some drinks with my card but was informed that I don't have the right kind, I need one with a special chip or something. I don't really know the details and haven't had a chance to ask anybody about it yet, but I was sad. Why didn't the bank issue me that type? O well.

Thanks again for reading, and I am planning a trip to Stockholm the weekend after our Copenhagen trip. So I promise that soon you'll have plenty of great pictures and stories from me!! Stay tuned~ 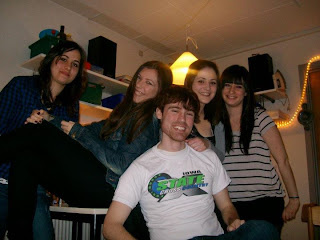 Silvia, Laura, Sandra, Maria and myself 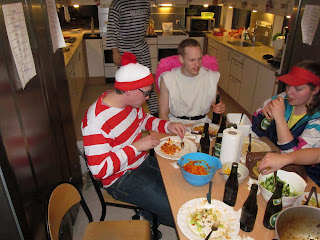 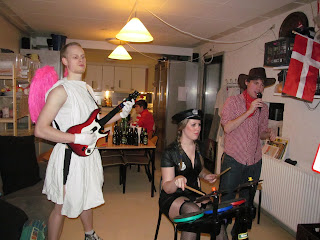