Getting a little warmer...

Things are getting a bit warmer here in Odense which is good because when I went to leave for the "Monday's Cafe" (yes, they say "Monday's" as a possessive) in the city center on Monday I found that I had a flat tire! So instead of staying home I decided that the weather was nice enough to walk. It was a gorgeous day and 40 minutes later I found myself at "Ungdomshuset", or youth house, which is a place that is a cafe for young people and serves cheap meals on Mondays. They have a daily meal which was brisket, potatoes, and cole slaw and they also have a delicious burger meal which was a burger and fries with two types of mayo for the fries (which are clearly homemade). Most of us ordered that. It was actually very filling and most of us felt like we'd won a major battle by finishing it. Except Anaise...the tiny French girl was talking about eating cakes and chocolate and wanting ice cream after finishing her meal. It was really nice to get out and just talk and have a good time with friends in the city. I also got a pitcher of water for our table, but everybody was drinking beer with their meal (no thanks) so I drank a liter and a half of water by myself! After spying on our Greek friend George across the room talking to a girl (and not-so-sneakingly trying to take pictures of him) one of my friends asked me "did you get your project done for tomorrow?" to which I replied "nah, i'll have it done by class Friday." "but Cody, the delivery is tomorrow" (they say delivery rather than "it is due tomorrow") so then I had to leave early and walk all the way back to my dorm to work on this programming project. I worked from 9pm until 6am and made almost zero progress. But, I did double check that the lesson notes from the previous lesson said "if you do not finish the project in this period, finish it by next lesson" which conflicts with the due date on the calendar, so I emailed our professor (and got an automatic reply saying he is ill, and he is still ill so he couldn't look at it anyway) and said that I would get it done when I could.

After class Thursday I lamented to Anaise that my bike was still broken and I needed to get it fixed so I could go get groceries because I had no food. She offered to make me lunch, so I went over to her place and enjoyed a piece of chicken and some potatoes cooked in a french cream with a cooked cream apple thing for dessert. It was really good and certainly the best lunch I've had since I got here! We talked and she told me about her school and how every year they rent out an entire hotel in a town in Spain for about 1000 students to go enjoy for a weekend. It sounded really fun and they had a video about it and everything. Perhaps it is because I go to a bigger school (28,000), but it seems like it is more common in Europe for an entire school/class/department to do something big like that. Another example is the new freshmen bio-chem (or something similar) students here in Denmark just went on a weekend trip to get to know each other. Definitely a cultural difference from America that I wouldn't mind seeing adopted back home.

After I left Anaise's dorm I went to a bike shop to try and get my bike tube fixed. Naive me thought they could just do it on the spot. Nope, the next opening was Monday. So instead I bought a tube and walked home. I then proceeded to walk to where I thought my Danish class was. We signed up for the course at the University, so I just assumed the classes were there. Nope. Wrong. So then I was embarrassed and walked back to my dorm and found somebody to help me fix my bike. It was actually really hard because the gear shift on the back is an odd contraption that we weren't familiar with so we it took a while to figure out how to get it off. I still don't actually understand the mechanics of how it changes the gears, but o well. My bike works now! Everybody went out to A-Bar again (like they do every thursday) but I decided to stay in and enjoy a night at home chatting on facebook and plowing through Vampire Diaries until 6am (class was cancelled Friday due to the professor being ill).

Saturday afternoon (after a late night of watching movies. It had been a while since I had seen Zoolander XD) I met up with Nikki and Danni to go walk around the city center taking photographs. It was supposed to be nice out...unfortunately the wind was SUPER cold and numbed our hands, but I still managed to take a lot of pictures. Good ones? Doubtful. But I took them, nonetheless :D Though I have no idea what most of them are pictures of...but it is pretty! Prettier than Des Moines or Ames at least haha That night found us all partying in Anaise's kitchen in HCO which was nice because I didn't have to ride all the way to the City Center and back. Or at least I shouldn't have had to. But I'll get to that in a second. We listened to terrible music on youtube and played with play-doh. Ewelina takes the prize for the most interesting creation: a blue whale (made of orange play-doh) using a jump-rope and wearing a gold crown with emeralds. Corina is the runner up with her pretty multi-colored flowers. But somewhere in the night I thought it was a good idea to put my keys in the pocket of Ewelina's shirt. Which was fine and all...until she left. With my keys. Why my friends let me do that (or why I thought it was a good idea in the first place) I will never know, but it meant that at 3AM I had to ride across town (on a borrowed bike) to get my keys back.

Today's group supper was prepared by my Spanish floormate Sandra and was a spanish omellete: A circle cake shaped thing of eggs, fried potatoes, and onions (called a tortilla? but not like a flour tortilla, so I am confused) and then "pan con tomate" (break with tomato) which was little bread circles with minced/crushed/something tomato and olive oil. We also had chorizo and a special spanish ham. This chorizo is just too rich for me. It was VERY delicious, but more than a bite and it just hurt to eat. The ham was a bit more mild but still quite rich and oily (if that is the right word?) and is now my favorite hors d'oeuvres meat.

Enjoy my pictures below and thanks again for reading! 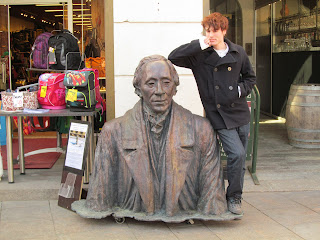 Just chillin' with my bro H.C. Anderson. (from now on he will be called H.C. Hammer) 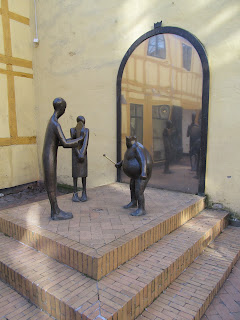 My Bro H.C. Hammer wrote a story about a King and a Mirror or something. This is a statue (near A-Bar, actually) depicting the story 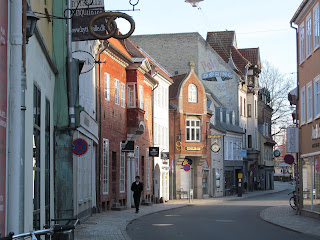 Me taking a stroll down a gorgeous, winding, Odense street 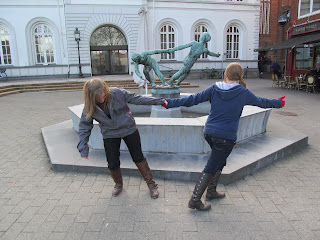 I had to beg them to do this, but I am glad they did :D 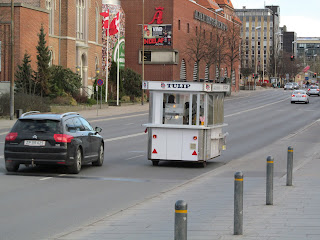 A food cart just driving down the street. It sells burgers and hotdogs and stuff. I very much regret not buying something from it :-( 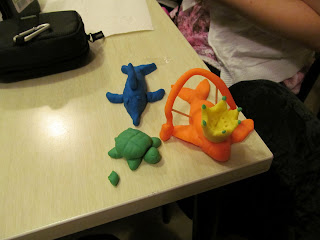 Ewelina's king whale and his jump rope next to a cute turtle and a not-so-cute blue whale or dolphin or something lol what did YOU do on Saturday night?? 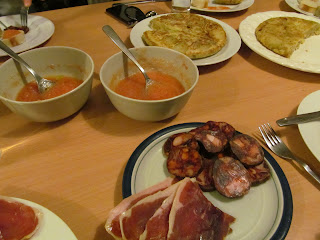 Spanish Omelette/tortilla something with tomato, chorizo, and some ham stuff.
Posted by Cody at 2:08 PM