Settling into a routine

I really do apologize for being so bad at this and waiting so long between posts...it makes them long and hard to read, but I appreciate those of you that make an effort to read them :-)

Monday, March 5th:
A pretty standard day, slept in and did nothing, then went to Monday's Cafe for my weekly burger. Delicious as always. The real special thing today was that Anais brought some cards (actually a 70+ card Tarot deck, but we only used the 52-card "standard" sub-set of the cards) and we played what is now called "the slap game", which is Egyptian Ratscrew. Most of the people didn't know how to play, but they now have the hang of it and are hooked!

Wednesday, March 7th:
I was invited by Corina (Romanian) and Juncal (Spanish) to go to a bar called Bodegaen for their weekly quiz night. It was quite intimidating to be in a bar packed full of Danes expecting us to lose, but it went quite well. The first round was 5 categories of 3 questions each (15 total questions). The quiz-master asked questions in Danish and then came over and translated them for us. The first three were computer questions (The answer to the first one was ctrl + alt + del, the second question was "what is RAM?", and the third question was about keyboard layouts and the answer was Dvorak. I think I was the only person in the bar that knew the answer to that one...). Then after the round we handed in our answer sheet and waited for it to be scored. The quiz master began reading off the scores and places and teams cheered, but we didn't hear our name. Then finally we did, and one of the other teams boo'd. That's when it hit us: WE WON! A group of three friends from three different countries just beat a room full of Danish teams of 6-10 people. We were pretty excited and won a round of free beer. I don't know if I have said this on the blog before, but I hate the taste of beer...I barely got down half before I gave up. And that is also how the second round of the quiz went. They started asking questions about danish candy and danish kings and we said "nope...we have no chance". Altogether a great night out, though :-)

Thursday, March 8th
My first Danish lesson...I had missed the one before so I struggled through the beginning, but by the end I was able to say "Hej! Jeg hedder Cody. Jeg taler engelsk. Jeg kommer fra USA. Jeg bor alene på første sal til højre." Which translates to "Hi. My name is Cody. I speak English. I come from the USA. I live alone on the first floor to the right." I will tell you more about Danish lessons in the weeks to come.

I don't think I need to describe my weekend anymore...it's pretty standard at this point haha But I met some people from the Czech Republic for the first time, so that was neat. Also, next Saturday we will visit Copenhagen for an ESN trip, but this weekend they visited us and there was a big party at Club Retro. Somebody brought an ESN flag (reminder, ESN stands for Erasmus Student Network) and inspired me to put in an order for one myself. Then I will have all my friends here sign it :D

Monday, March 12:
I woke up later than I should have and raced to the bank to withdraw 1450dkk so I could rush to the university to pay for my Seabattle Tickets. [http://esnodense.dk/event/seabattle-0] For just over $250 I am going on a 5 day trip including a 48-hour cruise from Stockholm, Sweden to Talinn, Estonia. That includes transportation and dinner buffet on the cruise. There will be some other expenses along the way, but there is no denying that at that price this trip is a STEAL! That will be April 21-25. Oh, and all my friends got tickets as well :D After we got our tickets we went to the cafeteria which was an interesting experience. They had a buffet where you pay by weight, 8kr per 100g (if you convert it then it's 7 dollars for a pound or so). I got some rice (driest rice I have ever eaten) and some spicy meat/vegetable/slop that i put on it. I also cut off two slices of bread and grabbed some turkey for one and some salami/spiced sausage meat for the other for open faced sandwiches and a strawberry yogurt drink (the Dane's love yogurt drink) all for about 7 dollars.

Then I dragged Danni and Nikki to the city center to go to Lidl. That is where I bought frozen pizzas after arriving during my first walking tour of Odense. To keep myself from having to go back again soon I bought 10 pizzas. The American way :-) Then we rushed home to drop off our groceries before leaving again for Monday's Cafe. The meal of the day was "coq au vin med mos" - Rooster in wine with mashed potatoes. The meat, "gravy", and potatoes were GREAT, but there were these mini onion things in it that I strongly disliked. Also, it was not enough food...so then I ordered a burger. It was a large meal, but only 14 dollars for both meals. I can stomach that (pun intended!) Then, as is our new custom, we went back to play egyptian ratscrew :-)

Thanks for reading, I have many exciting trips coming up so stay tuned for many great pictures and stories! 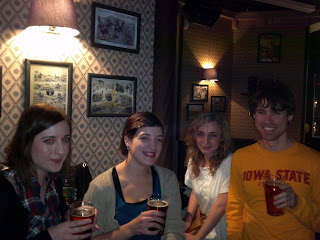 Ewelina showed up after we won the first round at quiz night and was able to share in the spoils of our victory :-) 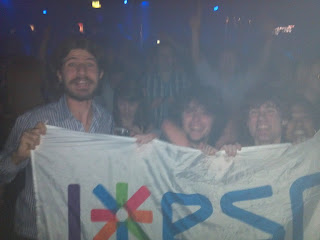 Totally inspired to get one of these flags now! How cool is this? 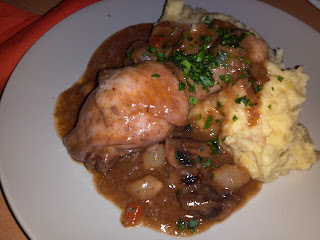 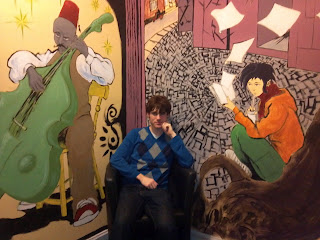 The back staircase in Ungdomshuset/Monday's Cafe has cool paintings all the way up. Upstairs we play Foosball :-)
Posted by Cody at 11:35 AM