I spent my Wednesday in Paris sleeping. I woke up around 12 or so and made a "frozen" pizza (it was refrigerated...can you believe that? so it takes less time to cook. awesome!) then went back to sleep until 6. I  had been pretty sick the day before and I had virtually no sleep the previous nights so the 16 hours or so of sleep that I had this night were incredibly important. Then I met up with my friend Olivia from ISU. Can you believe that?? My friend from freshman year Calc II just happened to be in Paris at the same time I was. So we met for dinner and went to this cafe. We waited for like 15 minutes and weren't helped, so I went up to the bar and said "we are sitting over in this corner and haven't been helped", the waiter guy made some noises (might have been french words? not sure :P) and motioned me away. after waiting a bit longer we hopped down to the next cafe where we were waited on instantly. Much better experience :D Then we went to the Eiffel Tower with the intentions of going up the stairs but we realized we were there too late. So we settled for walking around the grassy areas near it and watching it light up. It was beautiful, seriously. I loved it. Then we saw the peace memorial which is some glass panes with "peace" written in different languages. Except it isn't so peaceful because half of them are shattered and some are missing because people keep throwing things at it. Oops. Then we made our way back to our area of Paris and said our goodbyes. It was great seeing somebody from home, if only for a night :D 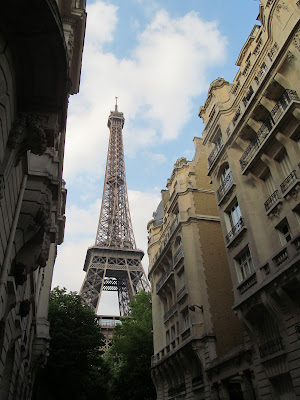 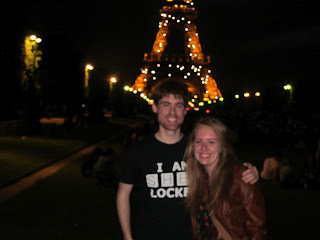 The next day in Paris was a bit longer and even more exciting. Nat and I woke up and headed out to see the Arc de Triomphe and walk down the Champs Elysees (a LONG and "beautiful" avenue in Paris). The Arc is MASSIVE, much bigger than I was expecting. I really enjoyed seeing it. Champs Elysees is where the Tour de France finishes each year. I appreciate it for that reason, and I look forward to seeing it in the race this year, but other than that it was just another pretty boulevard IMO. It had some really fancy and expensive shops though. At the end there is an Egyptian Obelisk and some beautiful fountains. Or at least they would have been if the water had stayed in the fountains...instead it started to pour rain as soon as we got there. This was the only place we'd been "out in the open" so far, so it couldn't have picked a worse time to start raining. I loaned Nat my jacket for protection, so by the time we got under cover about 10 minutes later I was soaked. We found a metro line and went home to change, then we went back out to meet up with some Erasmus friends at a bar :D 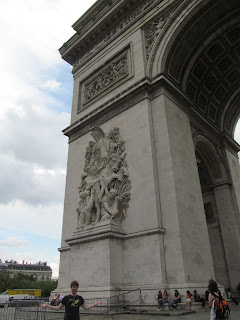 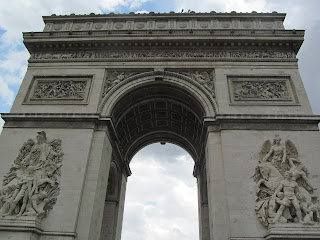 It was a WONDERFUL reunion between me, Anais, Alexis, Meg-Anne, and Jeremie, some frenchmen from Odense. It had only been a couple days since I'd seen a couple of them, or a week or two at the most for the rest, but it was still nice. They complained that hearing only french around them was boring, and they missed speaking English (though that didn't stop them from speaking french around me ;D). We were also with Alexis' brother, Alexis' gf, and Alexis' brother's gf. They had plenty of questions for me and I taught them some English and we had a good time. They really struggled to understand why I was only drinking water from 6-8 though, but o well! Then went to a Falafel joint in the Jewish district of Paris (Jeremie is Jewish). I had some kosher shawarma and it was delicious! Though I regret not asking for the Falafel mix :P All-in-all it was a good night and I'm glad that I got to see my French friends in Paris. Nat asked me if it was weird, and I said "no, not yet. I saw them just a couple days ago and I traveled with them before so this feels like just some more traveling. But if I came to Paris in a year from now (or even longer!) and saw them in Paris then yes, that would feel strange. And I really hope that happens!!"
Then today Nat took me out to see Sacré-Cœur Basilica (Sacred Heart Basilica) at the summit of the butte Montmartre, the highest point in the city. It was the prettiest thing I have seen since I came to Paris and maybe since I came to Europe. The outside is BEAUTIFUL, and the inside was also (but it said not to take pictures so I didn't. Even though maybe it meant no flash? o well. too late now!) Near the building is an artists district filled with street painters that just paint their style all day (caricatures, parisian scenes, stylized eiffel towers, or more sophisticated things). Even the simple stuff was good, but there were some genuinely talented artists there that made some great paintings I wish I could afford. We visited a statue of a man coming out of a wall that was based on an old story by a famous Frenchman about a man that could go through walls to hear conversations he shouldn't, to get away from trouble, etc. Nat visited it when she was a school-child because she used to live in this area and attended school nearby. I thought it was neat to share in that part of her childhood, she just thought it was weird to be back in this area of town XD 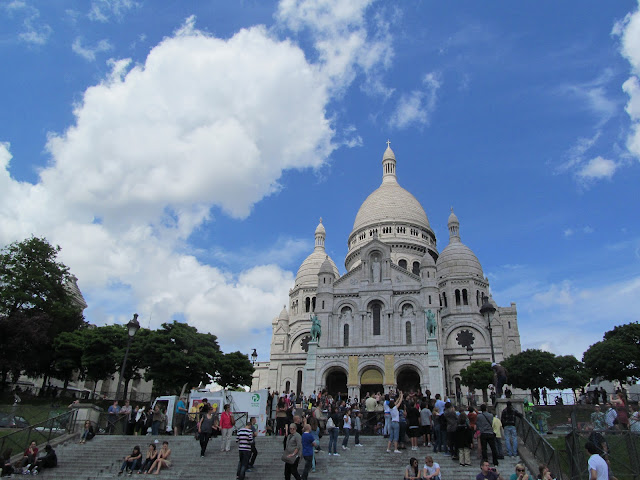 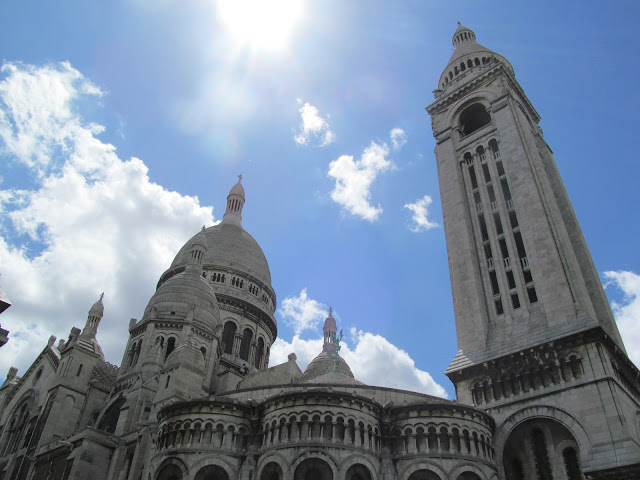 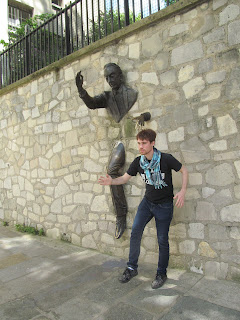 Overall a good couple days. I stay here until the morning of Tuesday June 26 when I spend the day traveling to Leipzig, Germany where I will stay with my friend Silvia until Saturday June 30 when I will take a train to Vienna, Austria. There I will stay with Christina's sister Veronika and Christina will come join us, and I will leave on July 4th to go to Vilnius, Lithuania. "Where is lithuania?" you might say? Good question, but google can probably show you :-) There I will be staying with Raimonda and Gintare until July 9th when I head back to Copenhagen/Odense for a few days before finally coming back to Iowa on Friday July 13th.

From there we headed back to the area that we got rained out of the day before and got to appreciate the obelisk without rain and walk to the Louvre and it's trademark Glass Pyramid and the inverse pyramid that goes into the mall below. It was really cool and the architecture of the Louvre is just stunning. Nat isn't so big on museums and I'm not big on spending money so we didn't go in :P Instead we walked over to Notre Dame Cathedral. From the front I don't find it very impressive, nor do I find the inside to be anything remarkable (though to be fair, service started before we were able to take a full tour). I mean, I really liked it, but compared to Sacré-Cœur Basilica I just wasn't so impressed. But it was HUGE, so it does have that going for it. And from behind it really is a gorgeous building. 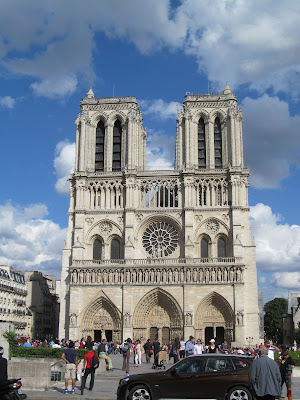 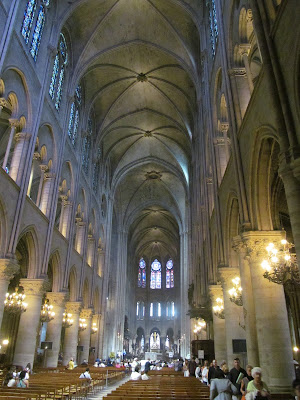 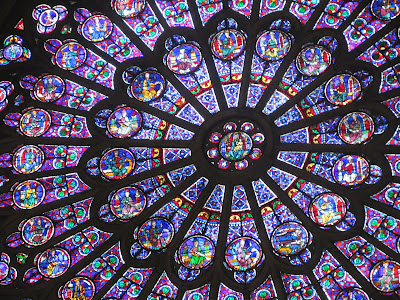 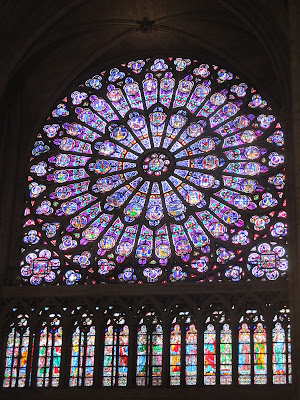 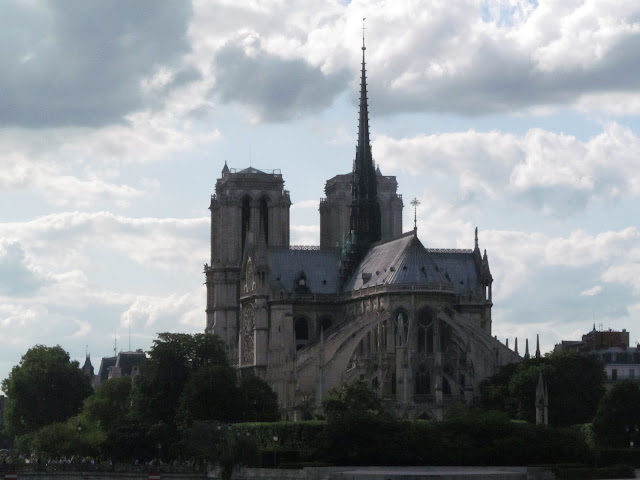 After that we made our way back home and stopped at the super market where Nat bought some Foie Gras pate to show me. It really did taste pretty good, I can imagine how good it might taste at a restaurant, but I am not sure the taste makes it worth the ethical concerns. That being said, the ethics of animal treatment in the US is certainly up for question so I am not prepared to judge the French at all :P


Thanks for reading, everybody, I really appreciate it!!
Posted by Cody at 3:46 PM