First things first: I passed my first exam! It was for my C# programming class. Beforehand we are given a list of topics that we should prepare for (i.e. make a powerpoint presentation for each one) and then when we show up to the exam we pick a card with a number, the number we get corresponds to a topic. and then we give a 7 minute presentation on that topic and provide examples from our project, then the instructor and the other examiner ask questions for a bit about the topic and then we wait for our grade. I received a 10 on the danish 7 point scale which is the equivalent of an A, A- or so, MUCH better than I thought I would do. Only 3 exams left, wish me luck! And sorry for the lack of pictures. My "party" camera is broken, and my nice camera is too big to take to take everywhere with me and when I take it to other events I always forget my memory card...Ok, so now the fun stuff.

You might think that after four months of constant interaction with the Erasmus students all gathering at the same bars, going on the same trips (Copenhagen, Berlin, Seabattle, etc), and having so many mutual friends that it would be hard to keep meeting new people. But no. Almost every week I meet new friends and often in serendipitous ways. On my way back from Legoland a month or two ago I couldn't find an empty seat with a friend so I sat next to girl I didn't know. She wanted to nap, but instead I chatted with her for a lot of the ride and found out her name was Gintare and she seemed pretty cool. Then, shortly after that I met her again at the Eurodinner where her and her other friends (Raimonda, who has a PERFECT smile and Aurelija) were preparing Lithuanian food. These girls (and their Polish friend Ania who might be the only person in Odense that likes to dance more than I do!) are the happiest, loveliest, and most adorable people I have met here and their love and enthusiasm for life is contagious. That night I found out that Aurelija had actually been to and worked in Iowa! She has a summer job with a carnival company and travels with them through Minnesota and Iowa between July and September doing concessions. It was amazing to find somebody who had been to Iowa and knew about the greatness of funnel cakes, corn dogs, and fresh squeezed lemonade! Then, a few weeks ago I met an Austrian girl named Christina who speaks pretty perfect English (she has spent a lot of time in New Zealand, but I'm quickly fixing her accent and some of her silly vocabulary) just by saying "I am from Iowa" and her replying "I know where that is! I study American Studies. The capital is Des Moines!" Or something like that. It just so happens that we love pretty much all the same things and now we own matching "I AM SHERLOCKED" shirts. Bros for life. Christina and I, together with Julie, form the "Terrific Trio", a group of fast-talking, nerdy pals who watch BBC shows and superhero movies. She's a cool Dane who studies English and has, with her own dyed hair, inspired me to continue dying mine red when I get back. Then I met a friend Madara from Latvia who also speaks great English and is one of the few people I've met here who can talk almost as fast as me (Madara, you owe me a horror movie and something crazy!). Then Laura and Veronica, Italians studying physiotherapy who don't like to give massages because nobody ever wants to give them one (oh, and Laura, I still owe you a massage!! And Veronica, I'm waiting to try your cookies :D). Then...yeah, there are many more but I think you get the picture. And that's part of the reason I don't want to leave, I am just getting to know some of these people and I know there are many more great people to meet! But that's ok, I am sure there some cool people to meet in Iowa, too.

Tuesday dinner with my Spanish friends is back in full swing! It is great meeting new people, but it also quite comforting to spend some time with my older friends :-) Since the ham balls were such a hit with the girls, I decided to continue cooking them Iowa Cuisine. I made them a dinner of Tuna Casserole with peas and potato chips on top which they loved. They returned the favor by making me paella the next week. YUM. It was delicious, and I promised one of my fraternity brothers that I would bring him back the recipe haha Then the next week I prepared what I would consider a traditional (if somewhat limited) Christmas Dinner/holiday dinner/family reunion dinner of a baked ham, cheesy potato casserole, and green bean casserole. (if you want to know what any of the dishes I mentioned are, just comment/message me and I'll explain to you!) Again, it was a hit! And it makes me feel really good that I can a) cook some real food and b) cook real IOWAN food while in DENMARK! So, if for some reason I end up living in Europe after I graduate I can be happy knowing that I can still have a taste of home. and c) that at least a few of my friends now know there is more to "American Food" than just McDonalds and fast food. Oh, and below we were celebrating the birthday for the girl making a silly face! haha 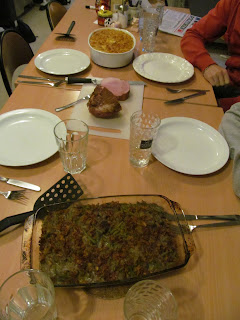 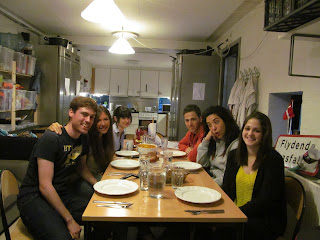 I have another blog post written already, actually, but to keep this from being too long I'll post it in a day or two. Thanks again for reading :-)
Posted by Cody at 5:37 PM